How to make Falafel

The world has different cuisines, with each country having its own specialty. This also includes its own spices and flavors. One of these cuisines that has a lot of distinct spice is the Middle East. An example of this is Saffron. You use saffron to add flavor to food. An example is saffron rice. A particularly pricey spice, but really a typical example of Middle Eastern Cuisine. Another example is Falafel. Falafel is incredibly popular worldwide, but has its origins in the Middle East. In this article, we’ll take a closer look at how to make falafel.

What is the Definition of Falafel

The meaning of Falafel is:

”Falafel is a typical Middle Eastern dish that has smashed chickpeas or beans balls. This balls are fried.

As described above, it is therefore a dish consisting of chickpeas or broad beans. The peas and / or broad beans are mashed. Subsequently, balls are made and fried. When you go to a kebab shop, you have probably seen this dish on the menu. It can be seen as a vegetarian dish. Before I go into this further, I first want to share the background of this dish. Falafel is a word that comes from the Arabic word Falafil. Derived from the word pilpal, which roughly means small round thing / peppercorn. The dish is from the Middle East, but the exact place remains unknown.

There are different approaches on the internet. One story shows that it’s first eaten in Egypt as a meat substitute. The dish went to different places like the Ottoman Empire. In the Ottoman Empire the beans were replaced by chickpeas. The origin of this great dish has even turned into a political discussion between the Arabs and the Israelis. It is therefore not surprising that it is considered the national dish by three countries. These countries are Israel, Palestine and Egypt. Falafel sandwiches are available in many kebab shops, including the Middle East. It’s a type of fastfood: a quick bite you can eat on the go. This dish has also gained a lot of popularity among vegans and vegetarians. The dish is an alternative to meat and contains a source of protein.

It’s not difficult to make, it only takes time!

It’s your choice to use chickpeas or beans. In the recipe below we use chickpeas. You can also use different types of pepper and cardamom to give the falafel more flavor. 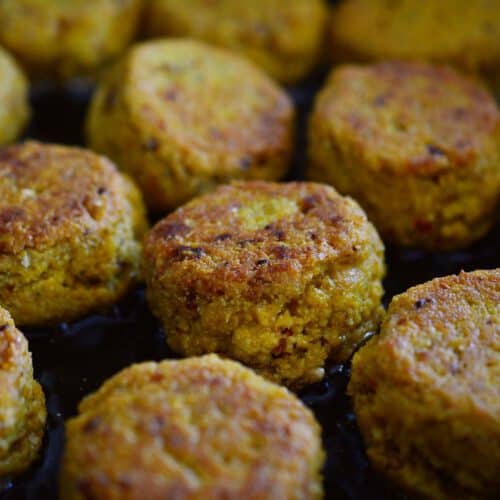 It's all about the mixture that goes out of the food processor. If you notice that the balls don't hold together. You can add the flour or an egg. Another option is to put it back in the food processor for a couple of pulses. To give it a more smooth texture. Watch out it should absolutely not have a hummus texture.If the oil is hot you can test it with one ball. Fried the ball for a couple of minutes. Take the ball out on a paper towel and taste it. Is the taste and texture good you can add the rest! One of the most important step is soaking. Make sure they soak for at least 18 hours. I highly recommend to go up to 24 hours. They need to double in size at least and feel tender!

What is a Falafel?

Falafel is a typical Middle Eastern dish that has smashed chickpeas or beans balls. This balls are fried.

Do I need to use Chickpeas or Beans?

It all depends on what you want. The recipe is based on Chickpeas.

How to make a Potato Dish With Chicken

How to cook Ribeye Steak

How to make Dutch Hutspot