How to make Espagnole sauce

A knowledge base article i have written is about the 5 Mother of Sauces. The modern sauces that exist of 5 sauces. One of the sauces I already described. This sauce is Béchamel. Today it’s time for the second sauce: Espagnole sauce, also familiar under the name Brown Sauce. In this article, we’ll take a closer look at how to make Espagnole sauce.

What is the definition of Espagnole Sauce

The meaning of Espagnole is:

”Espagnole also known as Brown Sauce is one of the 5 Mother Sauces in the French Cuisine. The sauce has a base of beef stock”.

The third sauce in the list of the 5 Mother Sauces: a sauce based on beef stock. The sauce is a basic brown sauce. This is one of the sauces that is the starting point for a lot of different sauces. Examples of these sauces are: sauce africaine, suace bourguignonne, sauce aux champignons, sauce chevreuil and demi-glace. This are a couple of popular sauces but of course there are a lot more.

Perhaps it was not immediately noticed by reading the name, but the name of the sauce in French means Spanish. As I have described before, the sauce is made by the French. There is a story about the origin of the sauce. One of the stories about the origin of the sauce is about Spanish cooks in the time of Louis XIII. The Spanish chefs were there to prepare food for a wedding. The chefs had tasted the current brown sauce, but saw room for improvement here. The sauce was improved by using tomatoes. Because the sauce was so popular, the makers also received credit for work and the sauce was therefore called Spanish in French.

The second story of course is also about Spain. In a book from 1877 it is described that the French cooks took their inspiration from Spain. They made a variation on the brown sauce that already existed. The inspiration was obtained from the bacon, ham and sausage of the Spaniards. Unfortunate that’s the only information that’s known about the brown sauce.

Because this sauce is a base, there are many derivatives. Below I have made a list. New sauces will be added over time:

If you have a sauce that is not in the list, let me know!

To make this fantastic sauce you need the following ingredients: butter, flour, brown stock, parsley stems, peppercorns, bay leaf, thyme and tomato puree. You can find the recipe below or watch our videos on YouTube! 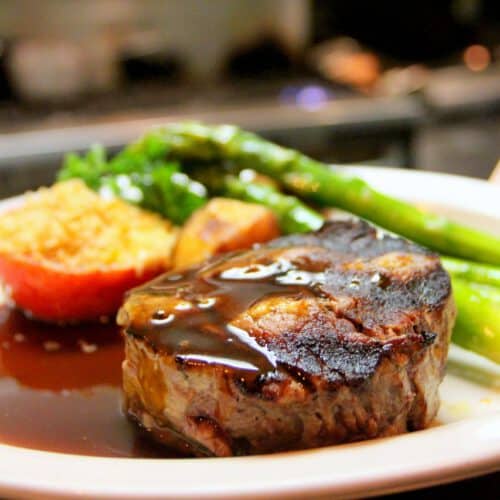 What is Espagnole Sauce?
Espagnole also known as Brown Sauce is one of the 5 Mother Sauces in the French Cuisine. The sauce has a base of beef stock.

How much stock do I need?
I recommend to use at least 1,5 liters. This amount will reduce when you cook it for a long time.

How to make Guacamole

How to make Balsamic Glaze

How to make Hummus

How to make Garlic Sauce