How to make Roasted Bell Peppers

Vegetables are a perfect addition to a dish and can also serve as a side dish. It was a new world for me that opened my eyes. Vegetables have a wonderful taste and color. In addition, it is absolutely not difficult. This is the idea that I had in my head before I started to read more about this amazing world. I was watching an episode on Netflix about the Middle East. The most beautiful dishes and colors came together on a plate. The woman who was making it must have been a great home chef. But you can become that too! Baba Ganoush, Fried Eggplant, these are also simple dishes that you can make. In this article, we are going to take a closer look at how to make roasted bell peppers.

What is the definition of Roasted Bell Peppers

The meaning of Roasted Bell Peppers is:

”The Bell Peppers needs to be roasting over a heat source that gives off heat. This will give the outside a roasted black color, forming a crust. Roasting makes the meat juicier and the vegetables shrink. When roasting, as the name implies, the vegetables lie on a grid”.

The bell pepper have a second name: sweet pepper. In European countries the vegetable gets the name Paprika. I did not know this either, but peppers are originally from Central and South America. Around 1492 the ships with seeds were first exported to Spain and spread through Europe and Asia. The mild peppers were developed in Hungary around 1920. A bell pepper grows best in a warm climate. The temperature must be between 21 degrees and 29 degrees Celsius. The soil for growing the vegetable must be moist for the best end product.

The name pepper was given to the vegetable by Christopher Columbus around 1492. This was the time when the vegetable was brought back to Europe. In Europe, the name pepper was a collective name for all ingredients and spices that had a sharp and hot taste. The peppers come in different colors. The most popular colors are red, yellow and green. Other possibilities are also white and purple. The largest pepper bell producer is China. Other producers are Mexico and Turkey.

Bell peppers consist for the most part of water. Water is around 94% of the vegetables. Followed by 5% carbohydrates. A pepper contains a lot of vitamin C and ADH.

To make this side dish you need a couple of ingredients. The main ingredient: Paprika / Bell Peppers. The other ingredients are: Olive Oil. That’s it. Only two ingredients. You can find the recipe below or watch the video! 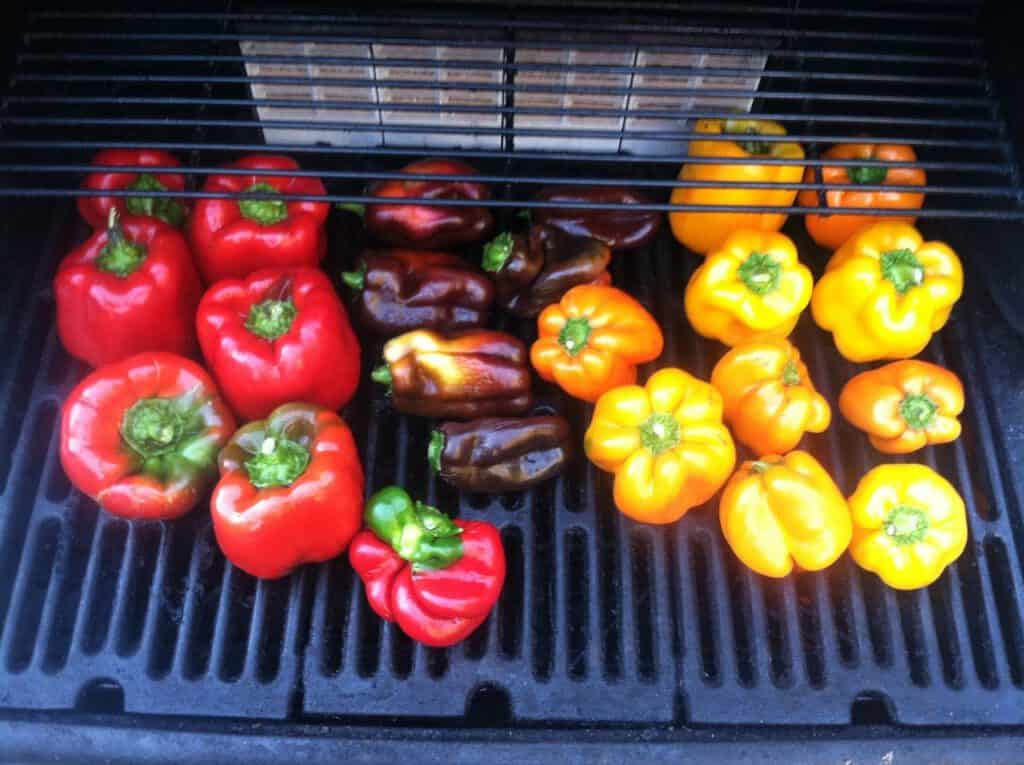 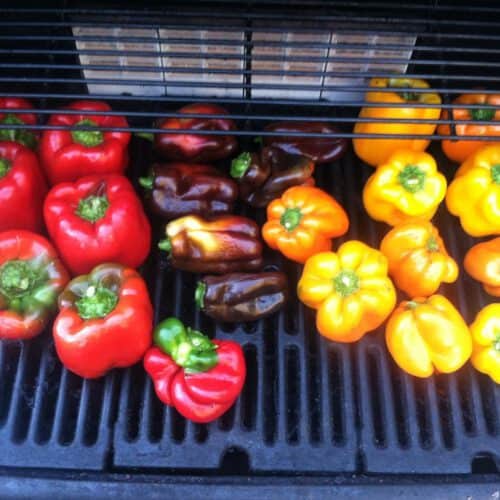 After roasting the bell peppers in the oven you have the choice for seasoning. You can add some pepper and salt or eat them without any seasoning.

What are Roasted Bell Peppers?
The Bell Peppers needs to be roasting over a heat source that gives off heat. This will give the outside a roasted black color, forming a crust.

Which Oil do I Need?
You can use normal Olive Oil.

How long does the roasting take?
That depends on your oven. Normally it will take between 50 and 55 minutes.

How to Fry Eggplant

How to make Baba Ganoush

How to Cook and Peel Fava Beans