Nolynskitchen
Hi i'm Nolynskitchen. A Home Cook with a passion for cooking. Follow my easy recipes and watch them on YouTube. Let me help you to make easy and wonderfull dishes!

You have found a nice recipe on YouTube or on the internet. It looks like flan, but the recipe says crème caramel. Or you will find that it is the other way round. It looks like crème caramel, but it’s flan. But what is the difference between crème caramel and flan? In this new knowledge base article, I’m going to talk about creme caramel vs flan.

What are Crème Caramel and Flan

When I can get to order a Dessert, that feeling is amazing. It’s the best dish when you are going to eat in a restaurant. Or that’s my opinion! Crème Caramel and Flan are both desserts. Both desserts have a nice layer of caramel on top. Before we go through the differences, let’s first discuss each dish substantively.

What is Créme Caramel

This is the most famous dessert of the two if you live in a non Spanish speaking countries. It’s a dessert originally from France: a custard pudding with a layer of caramel. The sugar is melted with water in a saucepan. Heating the sugar will cause it to caramelize. When the color is good, add a little more water. Add the caramel to the ramekins. After this you only have to make the custard.

You can easily make custard by heating heavy cream and milk in a sauce pan. A little steam should come off this. Then mix eggs and sugar together with a little vanilla extract in a bowl. Mix everything together well. When the sugar is completely dissolved you can add the milk to the eggs. You do this little by little. This way you ensure that the eggs can slowly come to temperature. If you do this too quickly, the eggs may heat up too quickly. This creates scrambled eggs.

Once everything has been added, strain the mixture and add it to the ramekins. You then only have to bake the ramekins at 150 degrees Celsius for 40 minutes in a tray with hot water. Then let them cool down completely. It is now time to turn the ramekins over. If they don’t come off in one go, gently run a knife around the edges. If you turn the ramekin over now, you will see that it comes off completely. The caramel will come over the edge and you have a fantastic dessert!

Créme Caramel consist of a France word, créme. Other names for this dish are:

You don’t need to confuse flan with créme caramel. Flan is also known with the name flan de leche. It’s a dish with a sponge base pastry that contains a filling that can be ether sweet or savory.

Flan can be eaten as a main dish if you have a savory filling, but also as a dessert with the sweet filling. This dish has a great history with originated during the Roman Empire. It’s a typical Roman Cuisine. It’s common to the dish is served cold. The dish has been very popular in Spain for years. And that’s where the big difference actually arises. In countries where Spanish is spoken and in America, Flan is really popular. When you talk about the name Flan outside of these countries, you often end up with a dish that resembles a quiche.

Difference between Créme Caramel vs Flan

Below I have made a chart with the differences between Crème Caramel vs Flan.

So the 5 differences of creme caramel vs flan are: 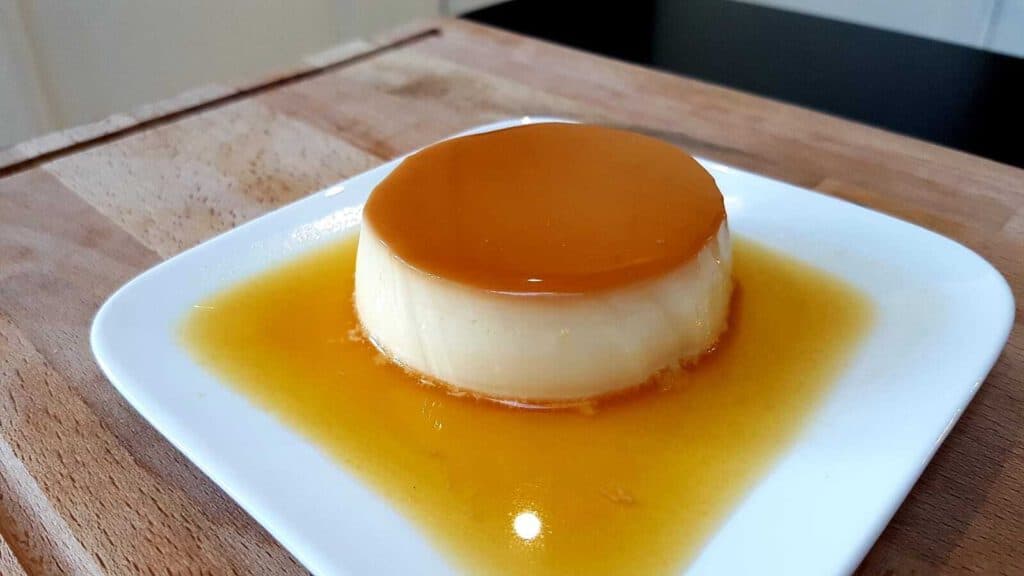 The biggest differences are in 5 parts: definition, structure, origin, ingredients, how and when to serve. The structure of the flan is somewhat spongy, while the creme caramel looks like a pudding. Creme Caramel is originally from France and Flan from Italy.

In addition, flan can consist of a sweet or savory filling. This savory filling also makes it very suitable as a main dish, while creme caramel really is a pure dessert. Creme Caramel can be served hot or cold while flan is always served cold. Hopefully, because of these differences, you will never make the mistake of creme caramel vs flan again!

Below you can find the most asked questions about creme caramel vs flan:

Is Créme Caramel the same as Flan?
Easy answer, no it’s not the same. Flan can also be eaten as a main dish for example.

Where is Flan Popular?
If you live in a country with a Spanish Language, there is a high chance you know flan as crème caramel.

What to make with Sourdough Starter